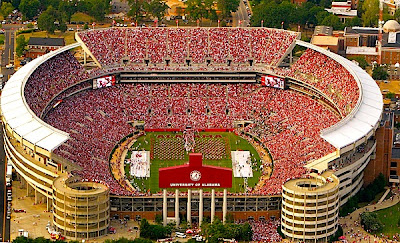 It's 161 days until Alabama coach Nick Saban's troops play host to Western Carolina in a packed Bryant-Denny Stadium, but the big news this week occurred off the field.

In a sign that Sabanmania is completely out of control, a couple in Hartselle, Ala., has marked the birth of their second son by naming him Saban. Tim and Hannah Witt welcomed Saban Hardin Witt into the world Tuesday. Their first son, now 23 months old, is named Tyde Timothy Witt.

Saban and Tyde. We kid you not.

Hannah said she thought her husband "was crazy in the beginning. I told some people. They said it was unique and it grew on me." So what happens if Nick Saban doesn't succeed as Alabama coach? "We'll tell our son he was named after one of the highest-paid coaches in college football," Tim said.

And what if Saban Witt becomes an Auburn fan? "We'll put him up for adoption," the father said.

Coach Saban's team begins spring practice Saturday, but the team will be without receiver Tyrone Prothro, whose playing days might be over. If Prothro is finished, he will always be remembered for his sensational catch against Southern Mississippi in 2005. You can see video of the catch on the Prothro website.

Thanks to EDSBS.
Posted by dawizofodds at 2:56 AM