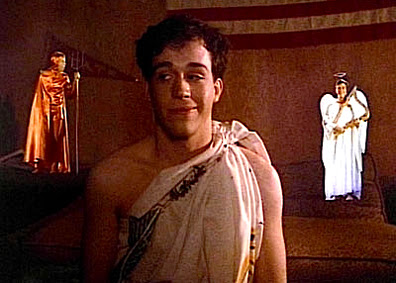 Boo on Ohio State! Two students who skipped class, traveled West, were able to sneak into the Bowl Championship Series title game and had it all chronicled by Cleveland Plain Dealer reporter John Campanelli are facing Double Secret Probation — or worse! Will Manzeo of Cleveland and Anthony Florig of Youngstown have received letters from Ohio State ordering them to a preliminary meeting at the school's Office of Judicial Affairs. "I think it's bull," said Manzeo, who has since transferred to Cleveland State. A third Ohio State student who made the trip, Dave Skutnik of Cleveland, had a ticket to the BCS title game and has yet to hear from university officials. Although the gate-crashing happened 2,000 miles from campus, the students face penalties ranging from a warning to expulsion.
Posted by dawizofodds at 2:10 AM

Forget "making an example" out of them, it sounds like a BCS hangover on the OSU administration's part...

I agree. If it had been "The" OSU winning by 27 points, these three would have received a slap on the wrist. They would have been hailed as harmless rascals who wanted nothing more than to be there cheering on their valiant team.

I'd bring a check for the cost of an upper level seat to the hearing and hand it over since that's really what OSU and the NCAA want. Money.

I hate OSU but good for these guys for getting in. If they weren't stopped at the door, the issue should be closed. If I were them, I'd say, no, that whole newspaper story was a joke and we actually had tickets but I'm not sure where they are now. Get lost. And then I'd leave that shitty university if this is how they treat devoted fans.

Here's my question. Weren't these kids both seniors? What kind of student transfers in the winter of his senior year?

I get so ticked off about this. I'm biased since I'm in college, but the students should be able to get tickets to the game, and not have to pay $500 or go through a 1-100 chance lottery.

expulsion for sneaking into a game? extreme.

so if you, ya know, like do something bad academically -- cheat, plagerize, etc. -- do they, ugh, kill you?