A Closer Look at USC's Cushing 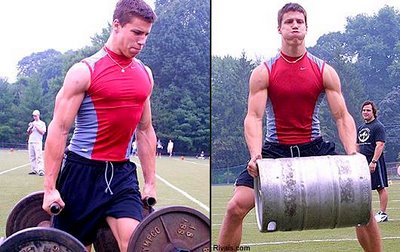 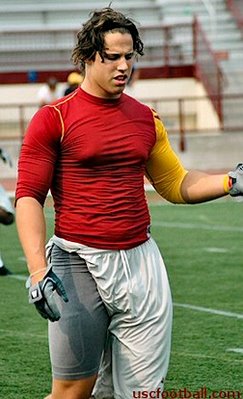 USC linebacker Brian Cushing was the defensive MVP in Monday's Rose Bowl. These are dated photos of Cushing, the top set, credited to Rivals from the summer of 2004, when he was must-have prep linebacker in New Jersey. The image on the left, credited to the USC Rivals site, was taken last summer. We note that at the time Cushing was recuperating from shoulder surgery. Cushing's breast enlargement is a condition known as gynecomastia, according to the site Steroid Nation. The photos created quite a stir last summer at There's Your Karma.
Update: Boi From Troy has an interesting post on the Cushing photos.
Posted by dawizofodds at 2:18 AM

All of these rumors about "Charo" Cushing are unfounded!

Keg lifting is always something I want in my linebackers

This is actually suspicious especially the pics tell a story. Anyone can actually see the difference among the pictures. But, like I said, it is suspicious. It can be just a rumor or it can be true.

Didn't one of the Ting brothers quit after testing positive for steroids?

Slow news day? This story was old months ago. It's just as ludicrous now as it was then.