Words of Wisdom for Alabama Fans 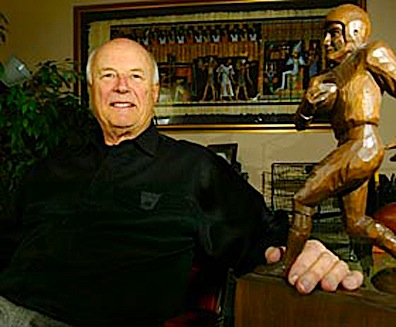 Can't wait to see the tab that consultant Chuck Neinas turns in for conducting the coaching search for Alabama. Neinas has carved quite a niche for himself and it's a lucrative one at that. Not that we can fault a man for wanting to make a buck, but isn't finding a coach the responsibility of the athletic director or a university search committee? Thus we hold Crimson Tide A.D. Mal Moore responsible. But Moore is not alone. USA Today reported this week that Neinas has had a hand in several coaching moves this season, including Randy Shannon being named the new coach at Miami. Of course, Shannon was already on the university payroll as Hurricane defensive coordinator. And you're telling us that Miami A.D. Paul Dee had to call Neinas to find this out? Appears to be the case. ... How much does Neinas make per search? The going rate is between $30,000-$40,000. Of course, we point to our post of Jan. 29, which linked the fine work by Brent Schrotenboer of the San Diego Union-Tribune. In a span of 18 months, Neinas billed San Diego State $76,496.36, which Smith College professor Andrew Zimbalist called "hilarious." And don't forget that Neinas' son, Toby, was hired at a $108,000 salary by San Diego State to coach tight ends. There's more if you start digging. ... That brings us back to Alabama. Regardless of what happened with Rich Rodriguez, Alabama is still without a coach. It appears even Neinas' pricey influence can't solve this brewing fiasco.
Posted by dawizofodds at 1:27 AM

Using consultants in your search for an employee that will be paid millions of dollars a year is just common sense responsibility. I don't think they are deciding who the right coaches are; they're the people who find out whether George O'Leary lied on his resume BEFORE a school hires him.

At least part of the reason why Alabama doesn't have a head coach right now is because, after the Rodriguez fiasco, and with bowl games just around the corner, there are going to be more coaches available or willing to talk in two or three weeks. Not only that, but thanks to recruiting quiet and dead periods, the effect of not landing a coach before the first or second week of January is minimal.

...but that was a neat trick you did with that mole hill.

1) Do we know that ND didn't use a consultant in the search that resulted in O'Leary's hiring?

2) Pete, nice job of trying to turn a tsunami into a sprinkle. Not to say that Alabama's current search will turn out any worse than the last one (no consultant on that one?), but you don't pay $40K to come off looking like Brown Mackie Community College.

3) I'm not begrudging the consultants, who do provide some necessary services. But the price might be a bit excessive when you consider that the consultant's recommendations might be colored by the coach's willingness to hire said consultant's son.