Spurrier Throws Assistant Under the Bus 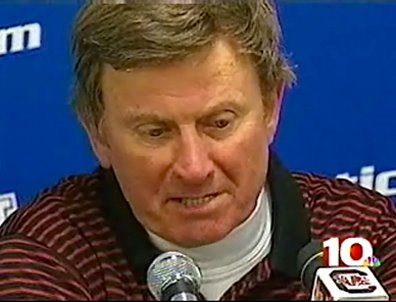 Imagine, for a few seconds, having a boss like Steve Spurrier. Frankly, what the South Carolina coach did to Ron Cooper, his secondary coach, was unprofessional and unnecessary. Spurrier put the blame for the Gamecocks' struggles in a 24-17 victory at Kentucky squarely on Cooper. He even brought in the assistant to the postgame press conference to answer questions from — you guessed it — Spurrier himself. "Bring [Cooper] in," Spurrier said to South Carolina spokesman Steve Fink. "I want to know what happened, too." A surprised Cooper eventually entered the room, and Spurrier started firing away with questions, according to the Columbia State.
"Coach Cooper, they want to know what coverage we were in on that 62-yarder. Three deep?" asked Spurrier.
Cooper responded: "Three deep. Had the bust by the left corner and the left nickel."
Spurrier: "And the middle guy wasn't real deep, either, was he?"
Cooper, his voice trembling at times, replied: "Had a bust. Yes, sir. They played good except for that one play. And that one play gave us a bad day."
Spurrier: "How about the 22-second play? What, we just didn't prevent, right?"
Cooper, pausing to loosen his tie: "Just didn't prevent. Yep. We were in three deep."
Obviously, these were a tense few moments. You can see some of Spurrier's postgame remarks — minus the Cooper interrogation — at WIS-TV, located under video central. If anybody can locate video of the Spurrier-Cooper exchange, we'd love to post it.
Posted by dawizofodds at 2:02 AM

I know these actions can be considered unprofessional but they are definitely necessary if South Carolina wants to get its program into the upper echelon of the SEC. It's the most competitive conference in the country and you have to show the fan base that you are serious in meeting that goal. You have to remember that Florida was an underperforming program before Spurrier arrived and his tenacity helped earned the Gators their place in the elite of college football.

You can find it on http://www.wltx.com/sports/default.aspx

I don't feel that this was unprofessional. I feel it was completely necessary.

Gamecocks are stupid if they think that was necessary.

If Cooper took offense to that then he doesn't belong at Carolina. That said, he'll be on the sidelines when South Carolina whens the SEC in the next couple of years

Cooper was a lousy head coach who sent Louisville's program into the toilet when it entered C-USA in the mid-90's.

You ask those questions privately. You don't humiliate your staff publicly.

Not that you asked which side we are on...but I come down on the "unprofessional" and "uncalled for" side. Berate, criticize, belittle and chide the guy all you want, but keep that in-house.

eeesh. way to go, Steve. the whole world now knows that you're a dickhead.

Your whole staff also looks to you for leadership. If they don't know that you have their back, then they definitely won't have yours.

Spurrier was at the WWE rasslin' show in Columbia last night. That says it all, don't you think?

Stever Spurrier is not a real man.

A real man would stand up in front of the media and accept any blame for the problems that occured on the field.

A head coach gets all the credit and he should accept any of the blame.

Would he bring out the secondary coach to get accolades if some of the DBs got some amazing interceptions? I don't think so.

Spurrier makes himself look like even more of an idiot.

Ron Cooper is a terrible coach, and I don't know why Spurrier hired him to begin with.

Want to know how a real football coach would have handled this?