Opening the Gates to Controversy 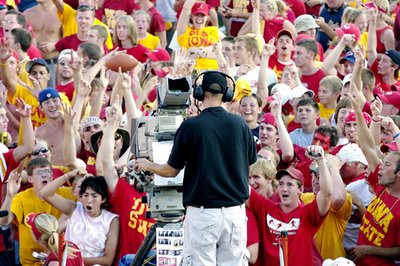 In an era where everybody is worried about cheats in sports, the biggest cheaters of them all continue to go unnoticed and unpunished. We are talking about those responsible for attendance statistics. It's the biggest crock in sports, yet many newspapers, television and radio broadcasts report attendance figures as fact when in reality, the numbers have often been tweaked to stoke interest among fans, advertisers and sponsors. There are several methods used to determine attendance, none of them you can count on. And attendance is important, especially when you consider that the NCAA mandates that a I-A team must average 15,000 in either paid or actual attendance for all home games once every two years. Because the governing body has no uniform policy for teams to follow, it should come as no surprise that pom-pom girls, reporters, the band and even comp tickets are often included in figures.
Posted by dawizofodds at 1:54 AM

The biggest crock of this is when a smaller school hosts a neutral site game and it counts as a home game. I beleive this was the primary reason they played MO in Kansas City last year. I also remember reading an article about a small school that hosted a big name concert after the game. The concert was free but you had to buy a football ticket.

Looking for information and found it at this great site... » » »