Crewcut Charlie Is Out of Control 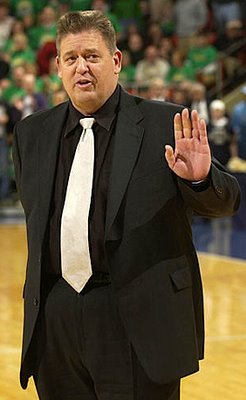 The gang at the South Bend Tribune never struck us as a threat to Notre Dame coach Crewcut Charlie Weis, but given the recent developments in South Bend, it's clear the big guy's aim is to once again intimidate reporters. A recent four-part series examined Notre Dame's recruiting culture and asked whether the Fighting Irish could "maintain principles and athletic dominance." What might have sparked the series was the hoopla surrounding California prep quarterback Jimmy Clausen, who arrived at the College Football Hall of Fame in South Bend in a stretch white Hummer limo and police escort, then announced he planned to attend Notre Dame. Team officials didn't appreciate the suggestion that Notre Dame's culture had changed because of the Clausen's flashy news conference, and Crewcut sent word through a team lackey that he and his staff would no longer take questions from the Tribune's Jeff Carroll and Bob Wieneke. The media freeze ended Tuesday, but reporters were banding together and chronicling Crewcut's latest bully tactics. Wrote columnist Al Hamnik of the Times of Northwest Indiana: "It's Charlie's way, or the closest you'll get to Irish football is the car radio." ... Thanks to the Midwest Correspondent.
Posted by dawizofodds at 2:17 AM

I agree it sucks

Wiz,
You should actually read the four-part series and ask yourself as a quasi-journalist what the article accomplishes and what basis in fact contains. I believe that if had read the articles, your blog would benefit and might not suck.

Wiz, you're on the wrong side of this one. Brian at MGO has a good take on the situation

Well, I've visited your site this time. Considering that you make statements without backing and have opinions without facts, you should visit your own site. It says it is for winners, and you should do something to become one. In your case, whizzer might be closer to the truth.

I did read the four-part series and if Anonymous Weasels [or probably one Weasel writing several messages] weren't such blind fans they would see that blaming the messenger is not the way to go. Crewcut Charlie did it and now Charlie supporters are doing it here on a thoroughly researched College football blog. Stop blaming the messenger, you lemmings!

Yeah, you'll be back tomorrow.

Thank you for your undying allegiance. It is nice to know that I have the fans thoroughly snowed after my one season smoke-and-mirrors turnaround. Here's hoping you stick by me after ND goes 7-5 this year.

By the way, please lay off the Wiz. He's right, I am an arrogant @**hole. Did I mention my perfect SAT score? Too bad pass defense was not on that test, I might have had to learn it.