Deputy Known to Play It 'by-the-Book' 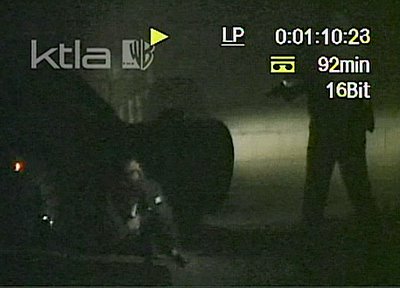 Ivory Webb, the former Iowa receiver who started in the 1982 Rose Bowl, is described by a former high school teammate as "one of the straightest guys I've ever known ... a good kid who listened to his dad." Webb, who has spent more than 10 years in the San Bernardino sheriff's department, is in the spotlight after shooting Air Force security officer Elio Carrion, who is listed in good condition. The incident was recorded by a witness and Webb's actions have been criticized by experts in the use of force by police. Webb's former teammates at Iowa were stunned by the news, and former coach Hayden Fry said he has "nothing but nice things to say about Ivory." (story is in comments section below). The man who recorded the shooting was paid $5,000 for the footage by KTLA, and he asked the station to donate the money to Carrion's wife. Link to video on right-hand side of page.
Posted by dawizofodds at 3:50 AM

A member of the University of Iowa’s 1982 Rose Bowl team has been identified as the California sheriff’s deputy who shot an unarmed man during a Sunday night incident captured on videotape.

The videotape shows an unarmed 21-year-old U.S. Air Force security officer being shot by a San B e r n a r d i n o County sheriff’s deputy as he appeared to follow the deputy’s order to get off the ground. The Los Angeles Times is naming the deputy as Ivory Webb IV, a letterman for the Hawkeyes’ football team in 1980 and 1981.

The security officer, Elio Carrion, was the passenger in a car driven by Luis Fernando Escobedo of Montclair, Calif. After a brief high-speed chase with the deputy’s vehicle in pursuit, Escobedo’s car crashed into a fence on a residential street in Chino, Calif. What happened afterward was captured on videotape by Jose Luis Valdes, who lives across the street from where the incident happened.

Valdes’ grainy recording has aired on national cable television networks. It showed Carrion hunched on the ground telling the deputy he was ‘‘on your side,’’ insisting he meant ‘‘no harm.’’

A voice on the recording ordered Carrion to stay on the ground, but moments later the deputy appeared to tell Carrion, ‘‘Get up, get up.’’ As Carrion arose, the deputy shot him three times from several feet away.

Carrion is hospitalized in Colton, Calif. His condition hasn’t been released, but Escobedo told the Inland Valley Daily Bulletin that Carrion was in good condition.

The deputy was been placed on paid administrative leave, his department’s routine policy when officers are involved in shootings.

Ivory Webb was tied for third in pass receptions with 16 for the 1981-82 Iowa team that snapped a string of 19 straight winless seasons and reached the 1982 Rose Bowl, where it lost to Washington, 28-0.

Webb transferred to Iowa in 1980 from Long Beach (Calif.) Junior College. He is a Long Beach native. The 1981 Iowa football media guide said his major was broadcasting.

Hayden Fry, who coached the Hawkeyes from 1978 to 1998 and was Webb’s coach in the 1982 Rose Bowl, said the shooting didn’t fit in with how he remembered his former player.

‘‘While he was on our football team he was an outstanding team player, he was a part of the family and I have nothing but nice things to say about Ivory,’’ Fry said from his Mesquite, Nev., home last night.

Although he’d lost track of Webb over the years, Fry said he was concerned about the future for his former player.

‘‘I certainly hope everything goes well for him,’’ he said.

Bruce Kittle, a chaplain who works in Cedar Rapids for the 6th Judicial District Department of Correctional Services, was an offensive lineman on that 1981 Iowa team. He recalled Webb as ‘‘a soft-spoken guy.’’

‘‘He was quiet and took care of business,’’ Kittle said. ‘‘He was never out causing trouble.

‘‘I have nothing but good things to say about him, really. He was very much the student-athlete.’’

‘‘He was a guy no different than the rest of us,’’ Olejniczak said.

According to the Los Angeles Times, a federal civil rights probe of the shooting had been opened. A separate investigation is being conducted by the San Bernardino County Sheriff’s Department.

Molly Rossiter of The Gazette contributed to this story.