Spread 'em Longhorns, You're Under Arrest 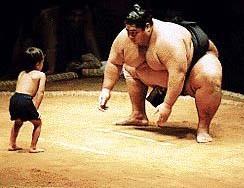 The charge? Fraud, and the evidence is overwhelming. You've not only touted the strength of schedule in what clearly is a down season for the Big 12, but then parlayed it into the No. 1 ranking in the BCS. Well, the gambling gods have spoken. Pinnacle Sports has released a line for the Rose Bowl and USC, winner of 29 in a row, currently is a six-point favorite (and rising) over Texas. The choice as to which side to be on is clear as picking a winner from the above fray. How do you plead, Texas? We will now submit Exhibit No. 1, aka the release announcing the Pinnacle lines, as evidence. It is located in the comments section.

Posted by dawizofodds at 3:51 PM

WILLEMSTAD, Curacao, Oct. 25 (PRNewswire) — The BCS Championship is still over two months away, but already college football fans and members of the media are anticipating a Rose Bowl matchup between the top two teams in the nation.

While six teams remain undefeated, the general consensus is that USC and Texas, the top-ranked teams in the polls the entire season, will continue to run the table and meet for the national championship.

Although both teams have a handful of games remaining on their schedules, today PinnacleSports.com became the first sportsbook in the world to offer a betting line on a potential Rose Bowl matchup between the USC Trojans and the Texas Longhorns.

The largest sports betting site on the Internet, PinnacleSports.com has calculated the point spread for the top-ranked teams meeting in the BCS Championship Game on January 4, 2006.

Despite supplanting USC atop the BCS rankings this week after routing previously unbeaten Texas Tech, the oddsmakers at PinnacleSports.com have listed the Texas Longhorns as 5.5-point underdogs versus the two-time national champion Trojans in the Rose Bowl.

When calculating the point spread on the potential Rose Bowl matchup, PinnacleSports.com cited USC's experience in national championship games and expected home-field advantage in Pasadena as giving the Trojans the edge over Texas.

"Every college football fan in America is already predicting a USC-Texas national championship game, so we wanted to give bettors the earliest opportunity to wager on the highly anticipated Rose Bowl game," said Simon Noble of PinnacleSports.com. "Although USC hasn't looked particularly impressive in some of their wins this season, there is really no reason to doubt Pete Carroll, Matt Leinart, Reggie Bush and the Trojans in a big game."

In the event that either USC or Texas should falter down the stretch, PinnacleSports.com has also created betting lines on potential Rose Bowl matchups between either of those two teams and the third-ranked Virginia Tech Hokies.

If Virginia Tech meets USC in the Rose Bowl, PinnacleSports.com lists the Trojans as 7.5-point favorites over the Hokies.

Meanwhile, if USC loses one of its' five remaining games and Texas meets the Hokies for the national championship, the Longhorns are 2.5-point favorites over Virginia Tech.

PinnacleSports.com favored OU in the Orange Bowl last year, so they're just as fucking stupid as you are.

I posted a bet on last year's BCS game and PinnacleSports NEVER had OU the favorite. ESPN and the talking heads did, but the closest betting margin found was USC -4.5.

You must be a sheephearder in Oklahoma if you are "fucking stupid" that much.

Lines are set TO CREATE action; nothing else. They set the line based on perceptions and what they think will create the most action. Lines are not raised or lowered because some guru thinks the game outcome is going to be different - the line moves when too many people bet on one side. Seriously, before you start professing linesmakers are geniuses of picking games, understand how the system works. This is a stupid argument for why USC is better. One of the many, many out there. Fortunately, it will be settled on the field.

For further clarification of my argument, you can read here

I used to subscribe that the PAC 10 was a weak conference and USC was over-rated. That was until I went to the Orange Bowl in January.

Granted from top to bottom I'll take the Big 12 over the PAC 10, but USC is hands down the best team in the country.

Go and pray for the sporting gods to forgive all of your ignorant blasephamy. I hope deep in your souls you know that you are forever a sporting moron, and you have no authority whatsoever to speak. Go to hell all you naysayers. The believers hold the trophy of righteousness, and it is beautiful.
41-38 - Texas Longhorns National Champions!!!!!!!!!!!